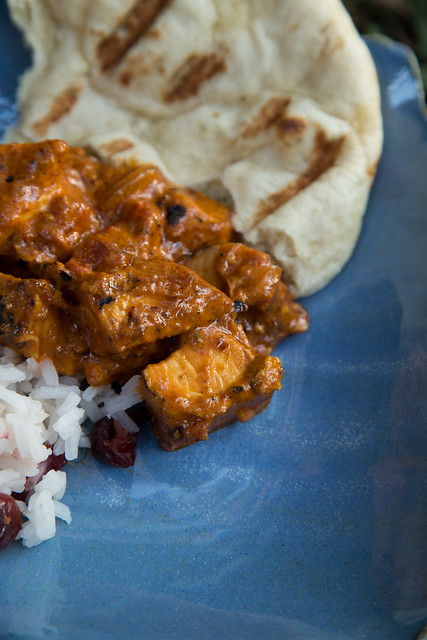 People are always asking us for a Tikka Masala blend but the thing is it takes more than just one blend to make that delicious dish ~ for true perfection you need Curry and Garam Masala and some extra chili flakes and some fresh ginger and cilantro.

We’ve made this a few times now and it’s always tasty. We started with this recipe from Bon Appétit, we’ve made a few tweaks, and now we think it’s pretty close to perfect. The real secret is grilling the chicken after you marinate it ~ yup, maybe that seems like a big extra step but it is soooo worth it.

First make your marinade. Combine all the ingredients in a zip top bag, throw in your chicken breasts and chill in the fridge for at least four to six hours.

Now make the sauce. Heat your oil over medium heat in a large heavy pot. Add the onion, tomato paste, red chili flakes, Curry, and Garam Masala. Cook, stirring often until the tomato paste darkens and the bottom of your pan begins to brown. Add the diced tomatoes with all their juices, crushing them a bit more with your hands as you add them. Bring to a boil then reduce heat and simmer. Stir often and scrape the brown bits off the bottom of the pan. Cook until sauce thickens ~ about 8-10 minutes. Add the cream and cilantro, simmer until the sauce thickens again, 30 to 40 minutes.

During this last thickening phase you can go ahead and cook your chicken. The most scrumptious option is to throw that chicken on the grill and cook it till it’s got a nice char going on and is cooked through. Cut the breasts into small bite-sized chunks and throw them into your sauce.

If grilling is not your cup-o-tea, the original recipe tells you to chop the chicken into bite-sized pieces before you marinate it. Then line a pan with foil and throw the chicken bits under the broiler in your oven for about 10 minutes or until it begins to blacken then throw it into the sauce and simmer for another 10 minutes until the chicken is completely cooked. Both of these options are excellent, yet we have found after much trial and error that we preferred the certain je ne sais quoi that the grill added to the dish but in a pinch the broiler worked just fine.

Serve with rice and naan and any other goodies you want to throw together.