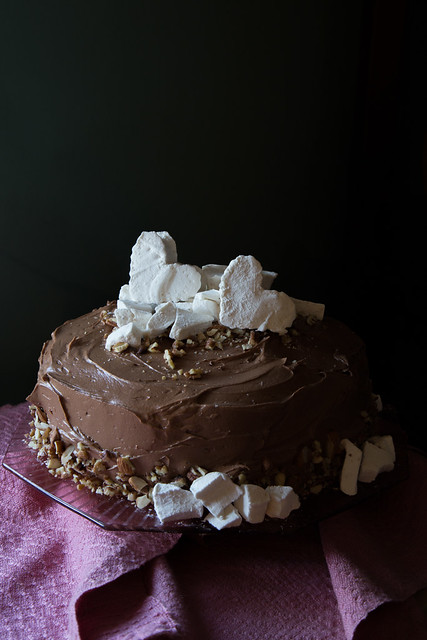 After making a batch of Ginger Marshmallows and cutting it into hearts, I realized I should probably do something with them other than just throw them into cocoa.

I’ve had the idea of this cake floating around in my head for quite some time and these marshmallows were the perfect excuse to make it happen. It’s a chocolate cake with a rocky road mousse filling and chocolate marshmallow buttercream frosting!! 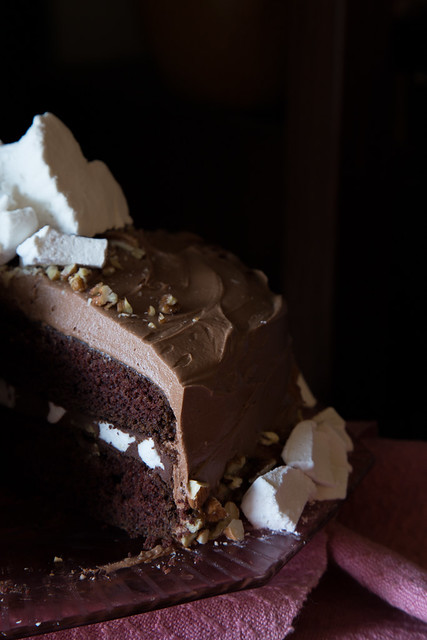 If you plan on making marshmallows you can use this recipe, it’s straightforward and it only takes a few hours for them to set. It’s also a small-ish batch, so you won’t have too many marshmallows left over!

Here’s how to make this beauty:

a pinch of salt

Preheat oven to 350ºF. Sift first six ingredients into a mixing bowl. Add the rest all at once and beat well. Bake in two greased and floured 8-inch cake pans for 40 minutes. While cake is cooling, make the mousse filling:

Put chips and eggs in a blender and blend until combined. Warm heavy cream over medium heat until just about boiling. Pour into the blender while blender is running. Continue blending until mixture is completely smooth. Pour into a bowl, add nuts & marshmallows and stir until combined.

Once the cake has cooled, place one cake layer in the bottom of a springform pan, pour the mousse onto this and spread into an even layer, place the other layer of cake on top. Chill in the fridge for several hours or overnight!

First things first, make the marshmallow base! In a small bowl combine 1/4 cup of water, vanilla extract, and the gelatin.

Combine 3/4 cup water, corn syrup, sugar, and salt in a 3-quart stainless steel pot over medium heat. Stir with a fork until bubbling, then increase to medium-high heat. Clip on your candy thermometer and cook without stirring until mixture reaches 250ºF (about 8 mins).

Transfer your thermometer to the bowl of your stand mixer. Pour the sugar syrup into the bowl and cool mix to 212ºF then add the gelatin. With the whisk attachment whip on low speed until gelatin has melted, then increase speed to medium-high. Whisk until thick and white and almost tripled in size ~ about 10 minutes. Pour into a 4 cup container and cover tightly. Let stand at cool room temperature for at least 2 hours or up to a week!

To make the buttercream, transfer your marshmallow base to the bowl of your stand mixer fitted with the whisk attachment. Mixing on medium, slowly add butter one tablespoon at a time, allowing 5 seconds between each addition. The creme will cling to the whisk at first but as butter is incorporated it will loosen. Once combined, scrape the side of the bowl and whip a minute more. Pour in melted chocolate, scrape down the sides and mix again. The buttercream should be light and creamy but thick enough to hang upside down from a spoon. If you want more info on buttercream, I suggest you check out this book, Brave Tart, it’s a great read, full of history and fun stories and good nuggets of baking wisdom.

Once your frosting is ready and your mousse has set, get down to icing your cake! I had a good deal of frosting leftover, luckily the frosting will be good to go if it’s refrigerated for 4 weeks or frozen for 6 months. I decorated the cake with extra chopped nuts and marshmallows.

Share with as many people as possible and enjoy! 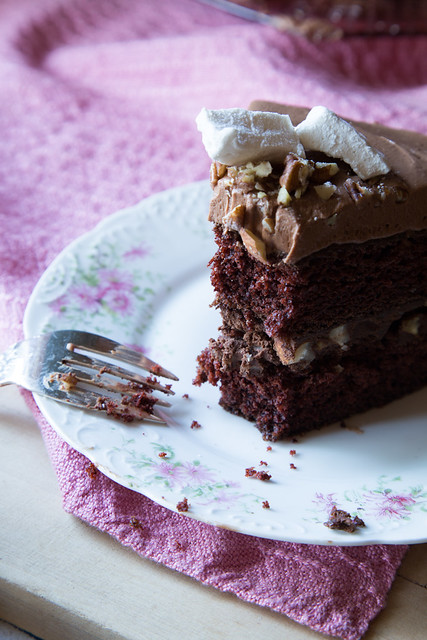