I’ve dreamed about this recipe since I saw it last summer in Bon Appétit.

But it was more than just a casual daydream. I yearned, I pined, I longed to taste the delicious almost caramelized outer layer of skin and meat that the photo showed me.

When I was asked what we should do for Mother’s Day this year, I immediately started talking about this recipe. Lo and behold, a pork picnic shoulder appeared and the recipe was roughly followed to produce this: 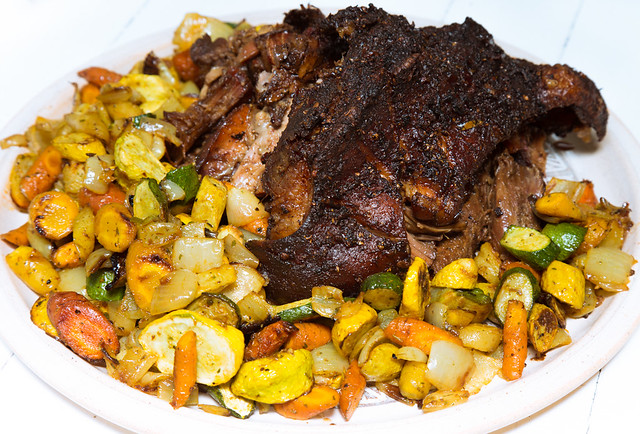 Finally getting to eat this was amazing, like that scene from The Notebook (you know the one, “I wrote you everyday for a year“). It was a long time coming but my year-long ever-present longing was thoroughly satisfied.

My advice, don’t take so long to make this recipe, make it ASAP. It’s worth it.

2 sun-dried chimayo chili peppers, or any dried pepper of your choice (but if want the good stuff give us a call and we’ll hook you up (we don’t put these on our website))

a wee bit of Adobo and Yakima Salt (or salt & pepper)

Warm up soy sauce just a tad in a small pan, throw in the chimayo peppers, this will warm them up and make them easier to slice. Once the peppers are more malleable remove from heat. Finely chop the chile and garlic into a mash. Put them into a small bowl and add the first four ingredients, soy sauce, and fish sauce.

Using a very sharp knife, score the skin and some of the fat in a tight pattern, be sure not to cut all the way through to the meat though!

Throw the meat into your crockpot. Sprinkle a light dusting of Adobo and Yakima salt onto the meat. Rub on the marinade. Cover and refrigerate over night.

Cook in crockpot on low for 10 hours. After ten hours remove from crockpot, at this point ours was so tender it fell right apart, so we threw just the skin into the oven at 450 to crisp it up a bit. After transferring the meat to a platter we threw in a little masa flour to the remaining juices and poured them over the meat. 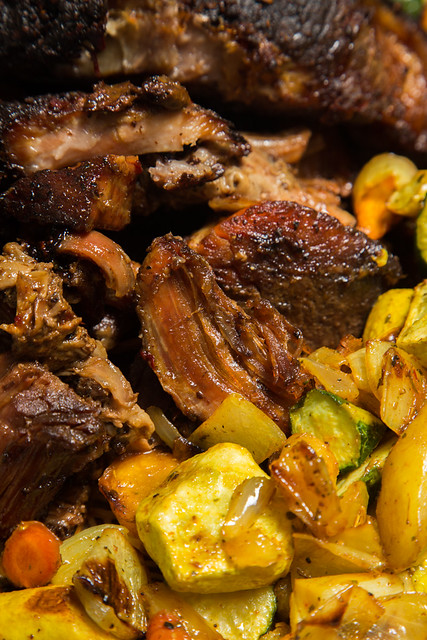 P.S. The first five ingredients of this recipe may seem intimidating, but don’t worry. Give us a call, tell us you saw this recipe and are dying to make it. We can send you the spices you need, premeasured for this exact recipe! So don’t sweat it, get adventurous, try new things, and don’t break the bank buying a ton of extra spice you don’t need.